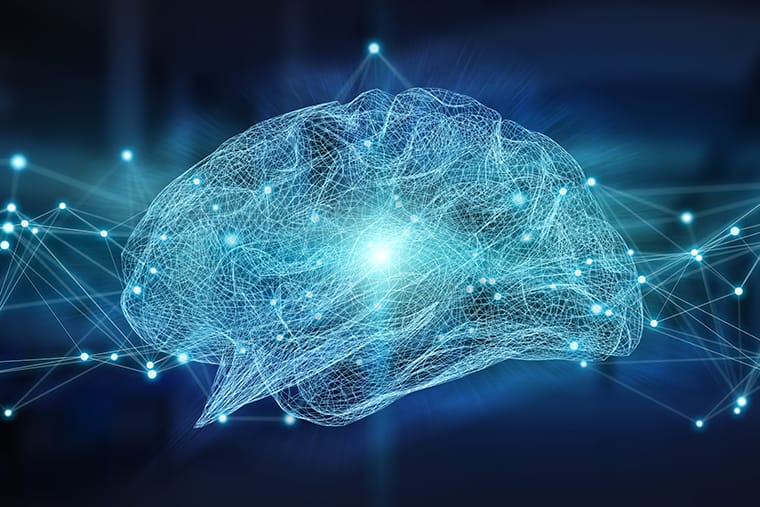 Researchers long wondered how the billions of independent neurons in the brain come together to reliably build a biological machine that easily beats the most advanced computers. All of those tiny interactions appear to be tied to something that guarantees an impressive computational capacity.

Over the past 20 years, evidence mounted in support of a theory that the brain tunes itself to a point where it is as excitable as it can be without tipping into disorder, similar to a phase transition. This criticality hypothesis asserts that the brain is poised on the fine line between quiescence and chaos. At exactly this line, information processing is maximized.

However, one of the key predictions of this theory — that criticality is truly a set point, and not a mere inevitability — had never been tested. Until now. New research from Washington University in St. Louis directly confirms this long-standing prediction in the brains of freely behaving animals.

“When neurons combine, they actively seek out a critical regime,” said Keith Hengen, assistant professor of biology in Arts & Sciences and lead author of the new paper published Oct. 7 in the journal Neuron. “Our new work validates much of the theoretical interest in criticality and demonstrates that criticality is a hallmark of normally functioning networks.”

Criticality is actively regulated, the researchers determined. But the mechanisms underlying this optimized state are not straightforward.

“We were surprised to find that, in our models, it was largely accounted for by a population of inhibitory neurons that, in retrospect, are well poised to regulate the organization of the larger network,” Hengen said.

A direct observation of criticality

Criticality is the only known computational regime that, by its very definition, optimizes information processing — such as memory, dynamic range and the ability to encode and transmit complex patterns.

Theoretical physicists originally proposed that the brain may be critical. Neuroscientists had a mixed reaction.

“There’s a long history of solid theoretical work on criticality and some fun controversy that adds spice,” Hengen said. “I think that this controversy comes from two places. First, much of the work in vivo has been largely descriptive, I think because these datasets are hard to collect and challenging to analyze. Either way, direct demonstration that criticality is something that the brain attends to has been absent.

“Second, there’s been quite a bit of argument about the math people use to measure criticality,” Hengen said. “Recently, people moved away from measuring simple power laws, which can pop out of random noise, and have started looking at something called the exponent relation. So far, that’s the only true signature of criticality, and it’s the basis of all of our measurements.”

“Our lab brings a very high caliber contribution to the discussion of criticality in the brain — because of the resolution [single neuron], and because of the total time we’re looking across,” he said. “We can watch critical dynamics as a function of time across an incredibly long period.”

The first author of the new study is Zhengyu Ma, a recent PhD physics graduate in Arts & Sciences, who conducted her work with Ralf Wessel, professor of physics. The research draws on data from neuronal recordings of freely behaving mice that Hengen collected at Brandeis University. Hengen has since built his own laboratory at Washington University, and he is collecting his own neuronal recordings — recordings that span months and hundreds of neurons.

Such recordings are extraordinarily data-intensive and technically challenging.

“The temporal resolution is very high — that’s an advantage,” Ma said. “Also, they can record nine days. I’m still very surprised by this. There are not many labs that can reach nine days of recording.” With few exceptions, the previous state-of-practice for neuronal recordings was 30 minutes to a few hours, tops — a maximum that use to limit experimental tests of criticality.

With Ma contributing to the computational heavy lifting, Hengen and his co-authors combined and processed the data from Hengen’s many single-neuron recordings over time to model activity across entire neural networks.

Criticality is disrupted, then re-emerges

Taking advantage of their ability to continuously track the activity of neurons for more than a week, the researchers first confirmed that network dynamics in the visual cortex are robustly tuned to criticality, even across light and dark cycles.

Next, by blocking vision in one eye, the researchers revealed that criticality was severely disrupted, more than a day before the manipulation affected the firing rates of individual neurons.

Twenty-four hours later, criticality re-emerged in the recordings — at which point individual neurons were suppressed by the visual deprivation.

“It seems that as soon as there’s a mismatch between what the animal expects and what it’s getting through that eye, the computational dynamic falls apart,” Hengen said.

“This is consistent with the theoretical physics that the critical regime is firing-rate independent,” he said. “It’s not about just the total number of spikes in the network, because the firing rate hasn’t changed at all at the very early part of deprivation — and yet the regime falls apart.”

The researchers now believe that criticality in the brain is likely connected to inhibitory neurons imposing and organizing the computational dynamics.

The findings could have important implications for motor learning and for disease. The brain’s self-organization around criticality is an active process, Hengen noted, and impaired homeostatic regulation is increasingly implicated in severe human pathologies such as Alzheimer’s, epilepsy, Rett Syndrome, autism and schizophrenia.

“One interpretation of this work is that criticality is a homeostatic end goal for networks in the brain,” Hengen said. “It’s an elegant idea: that the brain can tune an emergent property to a point neatly predicted by the physicists. And it makes intuitive sense, that evolution selected for the bits and pieces that give rise to an optimal solution. But time will tell. There’s a lot of work to be done.”