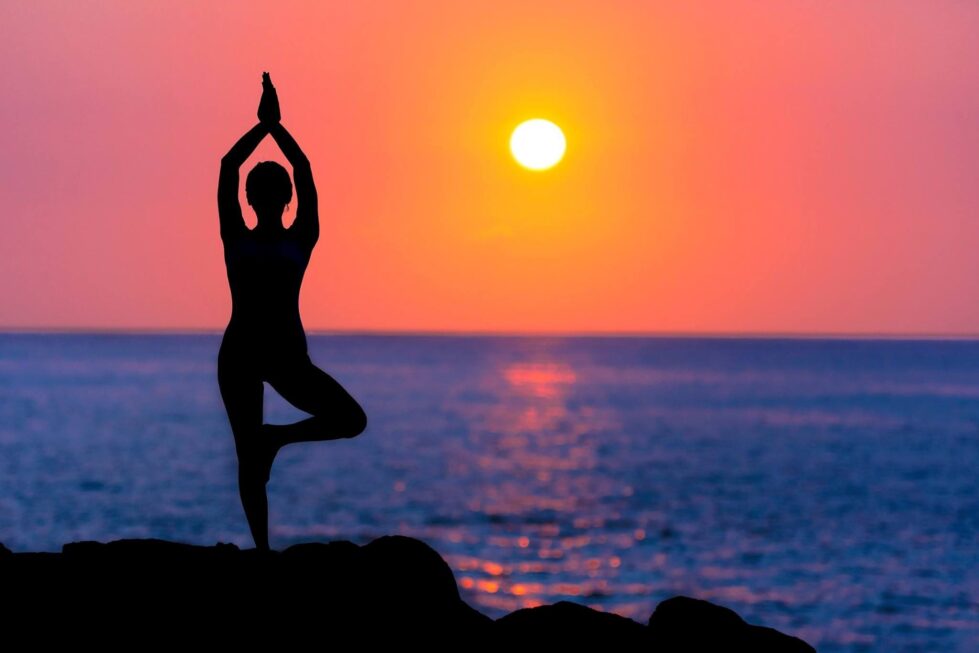 After practising yoga for a while, many of us may wonder if there’s more to it than what we do on that mat; and of course, there is. Emma gives an overview of the Yamas & Niyamas, the first two practices of Yoga.

The word ‘yoga’ is understood differently by many of us; for some it’s purely a physical exercise, a way to get stronger, healthier and more flexible; for others it’s meditating each day, and for others still, it might mean chanting mantras or worshipping a deity.

If there’s one thing to be sure of though, it’s that yoga – meaning ‘unity’, offers us a way of life that can be much more transformational than a 60-minute yoga class once a week….

While all the stretching, twisting, balancing and occasionally falling over (or a lot of falling over) is very beneficial, and certainly opens the gateways to a healthier, more vibrant and ‘alive’ sense of being, it is just one branch on a very big tree of yoga. Ancient texts such as the Hatha Yoga Pradipika and The Yoga Sutras focus very little on physical yoga postures (asana), and in fact when Patanjali speaks of ‘asana’ he is in no way at all referring to Headstand or Warrior II; he’s talking about the position you choose to sit in while meditating – your ‘seat’. It’s the tantric traditions that focussed more on what the body could do, and these texts show more evidence of where the postures come from…

The Yamas and Niyamas originate from the very well known text ‘The Yoga Sutras of Patanjali’, which many yoga teachers or teachers-in-training will have attempted to decipher at some point. Patanjali is known as a sage, but it’s very unlikely that one man wrote these texts – and far more likely that the texts are the culmination of what a group of Patanjali’s disciples wrote over a period of time.

Without going into too much detail – the Yoga Sutras are essentially less of a deep and philosophical book like many may think, and more like a guide or instruction manual on how to live in order to advance along a spiritual path towards enlightenment.

The Eight Limbs of Yoga

There are eight ‘limbs’ to the Yoga Sutras, each describing a different aspect of the yoga practice, and a different step on the ladder to realisation. These are commonly known as the ‘Eight Limbs of Yoga’:

For an overview of the 8 limbs, read: The 8 Limbs of Yoga explained

The Yamas and the Niyamas

Here, we’ll focus on the Yamas & Niyamas, the first two practices of Yoga according to Patanjali.

After practising yoga for a while, many of us may wonder if there’s more to it than what we do on that rubber mat; and of course, there is.

The idea of a yoga practice is really not just to focus and be aware and mindful and calm for the time that we’re on the mat, but to carry this state of being with us when we leave class, so it can have a much deeper impact than just making us look good. Sure, we might initially come to class for the physical benefits, but the reason so many of us stay is because there’s an inkling that there’s some other sort of magic at work here….

The Yamas and Niyamas are often seen as ‘moral codes’, or ways of ‘right living’. They really form the foundation of our whole practice, and honouring these ethics as we progress along ‘the path’ means we’re always being mindful of each action, and therefore cultivating a more present and aware state of being. It’s interesting to note that these five Yamas and five Niyamas resemble the ten commandments, and the ten virtues of Buddhism, so we’re all ‘different’ yet ‘united’ at the same time….

The idea of a yoga practice is really not just to focus and be aware and mindful and calm for the time that we’re on the mat, but to carry this state of being with us when we leave class

The word ‘yama’ is often translated as ‘restraint’, ‘moral discipline’ or ‘moral vow’, and Patanjali states that these vows are completely universal, no matter who you are or where you come from, your current situation or where you’re heading. To be ‘moral’ can be difficult at times, which is why this is considered a very important practice of yoga. Remember that the word ‘yoga’ means ‘unity’, ‘wholeness’ or ‘connectedness’; of course it’s important to be mindful, gentle and present in class, but if this doesn’t translate off the mat and connect into what we do in our day-to-day lives, we will never feel the real benefits of yoga.

The Yamas traditionally guide us towards practices concerned with the world around us, but often we can take them as a guide of how to act towards ourselves too. There are five Yamas in total listed in Patanjali’s Sutras:

Click on any of these Yamas to find out more about them.

By considering these aspects in our daily practice on and off the yoga mat, all of our decisions and actions come from a more considered, aware, and ‘higher’ place, and this leads us towards being more authentic towards ourselves and others.

The word ‘Niyama’ often translates as ‘positive duties’ or ‘observances’, and are thought of as recommended habits for healthy living and ‘spiritual existence’. They’re traditionally thought of as practices concerned with ourselves, although of course we can think of them as affecting the outside world too. Patanjali lists a total of five Niyamas, but again there are other traditions and texts that list more:

Click any of these Niyamas to read about them more in-depth, and find out how they apply to different aspects of life.

Iyengar describes both the Yamas and Niyamas as the ‘golden keys to unlock the spiritual gates’, as they transform each action into one that originates from a deeper and more ‘connected’ place within ourselves. Whether you consider yourself ‘spiritual’ or not though, and whether you practise yoga or not, these are all ways in which we can help ourselves and the world around us to be a better place.

If we are to really benefit from a yoga practice, it has to expand beyond the mat and into life. When this happens, it’s not just our bodies that get stretched, expanded and strengthened, but our minds and hearts as well. From that state of being, we move ever closer towards wholeness, connectedness and unity, and start to not just ‘do’ yoga, but live and breathe it in each and every moment.