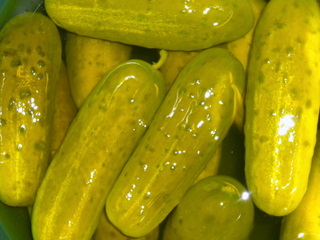 Nutrient changes always occur when foods are pickled. This rule applies not only to cucumbers but to pickled tomatoes, carrots, cabbage, and many other pickled foods. The exact nutrient changes depend upon (1) the composition of the liquid that you use to soak the food, (2) the length of time you allow the food to soak, and (3) the presence of absence of fermentation during food soaking.

“Quick pickled” cucumbers are usually soaked for a short period of time (several days at most) in a highly acidic solution (usually involving vinegar). “Fermented pickles” are usually soaked in a brine-based solution (highly salt concentrated) for longer periods (up to many months). As a very broad and general rule, you’re likely to get more helpful nutritional changes with fermented versus “quick pickled” cucumbers. Here is the reason: the fermenting solution and the extended period of soaking time allow microorganisms to become involved in the pickling process. A greater number of nutritional changes are expected in the case of fermented versus “quick pickled” cucumbers due to the activity of these microorganisms, and many of the resulting changes appear to be health-supportive.

However, it’s important not to limit your thinking about pickled cucumbers to the idea that fermented cucumbers are “good” and “quick pickled” cucumbers are bad. That conclusion is simply not true. Along these same lines, the idea that pickles in general are automatically “better” or “worse” for you than raw cucumbers is not a helpful way to think about these foods. We believe that a more accurate way to look at pickles versus raw cucumbers as to think about both foods as having their own unique, nutritional composition.

If helpful nutrients are lost during the pickling process (whether quick-pickling or fermentation), this nutrient loss will sometimes involve water-soluble nutrients, including vitamins, that get leeched into the pickling solution. We’d like to give you some examples here involving vitamin C, folic acid, and the quick pickling of cucumbers.

This same type of nutrient loss can occur with folic acid, another water-soluble vitamin. In the 8-inch raw cucumber referred to above, there are about 21 micrograms of folic acid. In the sour pickle example, there are only 2 micrograms. Once again, this nutrient loss is very substantial as a percentage, but since DRI (Dietary Reference Intake) recommendation for adults is 400 micrograms of folic acid each day, these 19 lost micrograms, while still important to notice, only constitute about 5% of the DRI requirement.

Many of the minerals in cucumber are contained in the skins, and keeping the skins on when pickling would be important if you wanted to maintain the mineral content. (Of course, we would highly recommend organic cucumbers, especially when leaving on the skins, since it’s the skin that gets the most exposure to potentially toxic sprays.)

We don’t object to the pickling of foods and think they definitely can have a healthy place in your Healthiest of Way of Eating. However, we also think about pickled foods (especially foods that have undergone fermentation during the pickling process) as being different than raw foods, and best thought of in their own category. For a variety of reasons, including the potential for some loss of water-soluble nutrients described above, we don’t recommend simple replacement of raw foods (including raw cucumbers) with pickled ones. But we do think it makes sense to enjoy both raw and pickled cucumbers in your Healthiest Way of Eating. In the case of cucumbers that have been pickled through fermentation, there may also be the potential for you to get some unique nutritional benefits thanks to the activity of microorganisms.