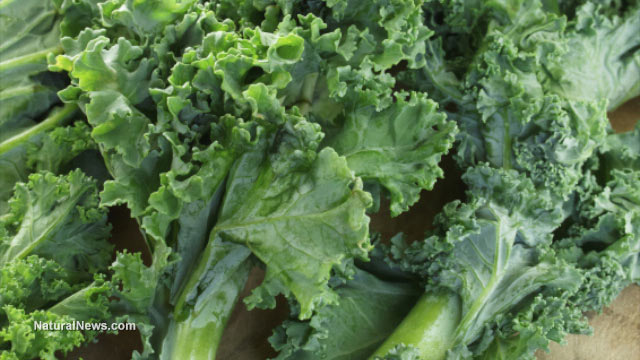 (NaturalNews) A diet rich in green, leafy vegetables could dramatically slow age-related cognitive decline, according to a study conducted by researchers from Rush University Medical Center and presented on March 30 at the Experimental Biology 2015 meeting in Boston.

The researchers found that much of the protective benefit from the greens came from vitamin K, which the body synthesizes from a precursor found at high levels in green leafy vegetables.

“With baby boomers approaching old age, there is huge public demand for lifestyle behaviors that can ward off loss of memory and other cognitive abilities with age,” lead researcher Martha Clare Morris said. “Our study provides evidence that eating green leafy vegetables and other foods rich in vitamin K, lutein and beta-carotene can help to keep the brain healthy to preserve functioning.”

The study was funded by the National Institutes of Health.

The study was conducted on 954 older adults (average age 81) participating in the Memory and Aging Project, an investigation into the variables that influence cognitive health over time. At the beginning of the study, participants filled out a detailed food-frequency questionnaire, which the researchers used to calculate their intake of various nutrients. The participants were then followed for between two and 10 years (with an average of 5), with a comprehensive cognitive assessment performed every year.

After adjusting for potential confounding factors including age, sex, smoking, education, exercise, and genetic markers associated with Alzheimer’s, the researchers found that higher consumption of green, leafy vegetables was associated with significantly less cognitive decline. The effect was so strong that the participants who ate one or two servings of greens per day had a cognitive age an average of 11 years younger than the participants who ate no greens.

Although prior studies have connected folate and beta-carotene with lesser rates of cognitive decline, the new study is the first to show a connection with vitamin K.

“Losing one’s memory or cognitive abilities is one of the biggest fears for people as they get older,” Morris said. “Since declining cognitive ability is central to Alzheimer’s disease and dementias, increasing consumption of green leafy vegetables could offer a very simple, affordable and non-invasive way of potentially protecting your brain from Alzheimer’s disease and dementia.”

Cognitive decline is not normal

The study adds to the growing evidence that cognitive decline is not a normal part of aging, but rather one that can be largely prevented through a healthy lifestyle.

Another Rush University Medical Center study, this one published in the journal Neurology in2010, actually suggested that memory loss is never normal and is always a sign of brain disease or injury – regardless of age. In that study, the researchers followed 350 male and female Catholic clergy for 13 years, giving them annual memory tests. Upon death, each participant’s brain was examined for signs of stroke, or two forms of dementia (Alzheimer’s and Lewy body disease). No signs of brain damage were found in the participants who died without experiencing memory loss.

Another study, conducted by researchers from the University of California-San Diego, Stanford University and published in the American Journal of Psychiatry in 2012, found that cognitive skills can actually keep improving until the end of life.