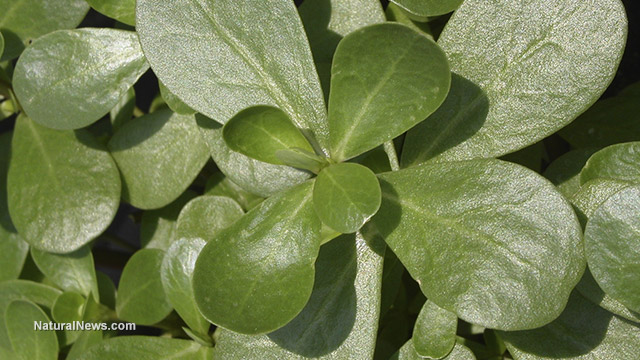 Rather than pluck weeds from the lawn or the cracks of sidewalks, many people are instead eating them and enjoying a range of health benefits as a result.

Dandelion greens, for example, are becoming more of a common sight in the produce aisle. In fact, so beneficial to health is the weed that many experts have touted dandelion root tea as an amazing way to help fight cancer cells and lead to their death. Whether its leaves are eaten in salads or dandelion root extract is ingested, the weed has been recognized as a healthy way to fight cancer without subjecting the body to harm, as is often the case when conventional drugs and medical therapies enter the picture.

Not only has dandelion been found to help health, but so too has purslane (Portulaca oleracea), another common weed. It’s a low-lying weed with thick leaves that vary in size, and it thrives in sunny environments. In Europe and throughout Asia, so enjoyed is purslane that the sour and salty-flavored weed, which has been likened to a having a lemony taste, is actually a staple.

When eaten fresh, its leaves contain have more omega-3 fatty acids than any other leafy vegetable plant. “It’s a miracle plant,” said Dr. Artemis Simopoulos, president of the Center for Genetics, Nutrition and Health in Washington, who made the discovery.

Foods rich in such fatty acids play a role in improving heart health and have also been linked to preventing developmental issues in children, such as autism and ADHD.

Additionally, researchers at the University of Texas at San Antonio have found that purslane has up to 20 times more of the possibly cancer-growth-inhibiting antioxidant melatonin than many other common fruits and vegetables.

It’s also high in another antioxidant, vitamin A, which has significant tumor-fighting potential, especially when it comes to oral and lung cancers.

“I think anyone who has a vegetable garden this year, the purslane will grow as a weed in it,” says Simopoulos. “They should not really throw it out. They should eat it.”