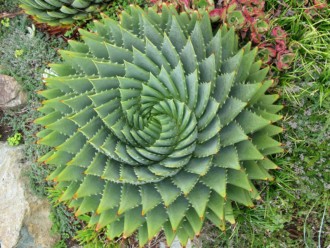 Plants are not simple bystanders in the environment, soaking up sun and otherwise engaging in a passive existence. They’re actually active communicators and engage in a complex relationship with their environment.

Not only do plants communicate with each other but they also take steps to protect themselves from predators. About 200 plant species, for instance, manufacture a glue-like substance that attracts sand or soil.

The resulting “sand armor,” which is created in a process called psammophory, has been the subject of numerous theories. Some researchers have suggested plants coat themselves in sand as a form of camouflage or for added protection during sandstorms.

Others have posited it may have to do with water retention or protection for radiation. New research published in Ecology has revealed what may be its true underlying purpose, however, which is to discourage predators from taking a bite.

Plants Use “Sand Armor” to Prevent Being Eaten

Researchers from the University of California, Davis studied two different plants that coat themselves in sand: the sand verbena and the honeyscented pincushion plant. In one experiment, they gently removed the sand from parts of wild-growing verbena plants then kept track of any damage from predators.

They also added sand to wild pincushion plants and compared them to pincushion plants that remained sand-free. The results were quite revealing. The sand-free verbena plants had twice as much damage from herbivores than sand-coated plants.

The sand-covered pincushion plants, however, largely escaped predation; only one out of 19 was eaten compared to eight of 18 that were sand-free. Next the researchers wanted to find out if sand’s ability to camouflage the plant was making a difference.

So they covered some of the plants in green sand, which would therefore make them stand out more in the environment compared to ordinary brown sand. No difference was found among the green- or sand-colored hues, which suggests the role of psammophory isn’t to camouflage but instead is to deter predation.

If there were any doubt that nature is an active participant, and recipient, to its environment, consider the fascinating research that shows music and noise both influence the growth of plants. As explained in The Journal of Alternative and Complementary Medicine:

“Plants are complex multicellular organisms considered as sensitive as humans for initial assaying of effects and testing new therapies. Sound is known to affect the growth of plants. Seeds are sometimes treated with ultrasound to help start the germination process …

Foliage planted along freeways to reduce noise pollution often grows differently than foliage planter in a quiet environment … Sound vibration can stimulate a seed or plant.”

In a series of five experiments that used okra and zucchini seeds germinated in acoustically shielded, thermally insulated chambers, researchers measured the biologic effects of music, noise and healing energy on the seeds’ growth.

“This group of experiments indicates that both the musical sound and healing energy used in this study had replicable and significant effects on the germination of two different types of seeds when compared to an untreated control.

Plants Warn Each Other About Pest Attacks

Plants communicate with each other. When a plant becomes infested with a pest like aphids, for example, it warns surrounding plants of the attack via a network of mycorrhizal fungi.

These fungi form a symbiotic relationship with the plant, colonizing the roots and sending extremely fine filaments far out into the soil that act as root extensions.

Not only do these networks sound the alarm about invaders, but the filaments are more effective in nutrient and water absorption than the plant roots themselves.

In research published in Ecology Letters, the mycorrhizal fungi were found to act as “a conduit for signaling between plants, acting as an early warning system for herbivore attack.”

Even more amazing, the warning led to systemic changes, particularly it caused the plant to increase production of volatile chemicals that repel aphids while attracting wasps, which are aphids’ natural enemy.

In bean plants where the researchers had removed the mycorrhizae connecting them together, the plants quickly succumbed to the infestation, presumably because they didn’t receive the warning to mount their defenses.

Another 2010 study published in PLOS One detailed the interplant communication of tomato plants, explaining:

… suggesting that plants can ‘eavesdrop’ on defense signals from the pathogen-challenged neighbors through CMNs to activate defenses before being attacked themselves.”

In one thimbleful of healthy soil, you can find several miles of fungal filaments, all releasing powerful enzymes that help dissolve tightly bound soil nutrients, such as organic nitrogen, phosphorus and iron.

This is one of the major reasons why tilling the soil is deleterious to gardening or farming as it damages these fragile fungal filaments. The last thing any gardener or farmer should be doing is tilling the soil.

Mycorrhizae aren’t the only organisms harmed by modern chemical- and technology-heavy agricultural methods. Soil and plant health also depends on many other microbes and critters living in the soil. This includes bacteria, fungi, protozoa, microscopic roundworms called nematodes, and earthworms.

It is the cooperation between these microorganisms—the soil’s biome—and the plants’ roots that is ultimately responsible for allowing the plant to absorb nutrients from the soil in which it’s grown.

Insects and weeds also have their place. They only really reach “pest” status when the balance is shifted in such a way that they’re able to get the upper hand. Otherwise, insects actually serve a very important role as nature’s “garbage collectors.”

Thanks to their specialized digestive systems, they remove that which is not fit for us to eat—things we cannot digest. Once you start to connect all these dots, you begin to understand the depth of nature’s intelligence, which always strives to maintain a healthy balance.

“Hearing” a Bug Chewing Prompts Plants to Mount a Defense

If your mind isn’t yet blown, it will be soon. Plants can “hear” the leaf vibrations caused by an insect chewing, and they subsequently release more chemical defenses to protect themselves. Interestingly, many of these chemical defenses, such as glucosinolates, are beneficial to human health.

Further, plants are capable of discriminating between vibrations caused by insect chewing and those caused by wind or insect noises. The research even suggests that minor pest attacks may play an important role in encouraging plant growth that has higher levels of important nutrients (to humans)! In a press release, one of the researchers stated:

“Caterpillars react to this chemical defense by crawling away, so using vibrations to enhance plant defenses could be useful to agriculture … This research also opens the window of plant behavior a little wider, showing that plants have many of the same responses to outside influences that animals do, even though the responses look different.”

When an animal is faced with a threat, it will typically move away to a less-threatening location. Plants, being non-mobile, do not have this option and so have developed highly complex mechanisms for sensing and responding to their environment, including to touch (by humans, wind and other forces).

According to the Journal of Experimental Botany:

“Examples of challenges related to mechanical force include wind, physical barriers, and predation. Initially, plants have to sense these stimuli and subsequently launch appropriate responses by either avoiding obstacles, clinging to supporting structures, or producing toxic chemicals to fend off herbivorous predators.

In 1881, Charles Darwin reported on mechano-stimulus-induced plant behavior. InThe power of movement in plants, Darwin described in detail directed plant growth in response to external stimuli, including how roots of many plant species reorient their growth direction upon making contact with barriers. Such observations were fascinating to Darwin and continue to be an active and intriguing area of research.”

It’s now known, for instance, that some plants grow shorter and slower when they’re touched several times a day. The growth response is due to a plant hormone that also protects plants from infections, and which is increased when plants are touched. A Rice University press release explained:

“When [plant hormone] jasmonate levels go up, the plant increases production of metabolites that give herbivores an upset stomach. Jasmonate defenses, which also protect against some fungal infections, are employed by virtually all plants, including tomatoes, rice and corn. The … study provides the first evidence that these defenses are triggered when plants are touched.

In the study, students touched the plants in a laboratory, but the researchers say the touch-induced response could also be activated by animals, including insects, and wind.”

Plants Can Provide Intelligent Support for Your Health

Most synthetic medications are based on compounds in plants. Scientists cannot create these substances but must, rather, try to make copies, But in their synthetic models they often end up with compounds that your body doesn’t recognize and doesn’t know how to handle. As Martha Herbert, M.D., Ph.D., assistant professor of neurology at Harvard Medical School explained in the documentary Numen:

A plant, however, is a complex of thousands of biomolecules, many of which are countervailing, so if there’s one effective compound that may have a toxic effect, it usually contains a countervailing compound so that it doesn’t harm your liver, for example.

It’s the interplay of chemicals that make the plant work, which is why you can’t study herbal medicine by isolating a certain element; you’ve got to study the whole plant. This is what conventional medicine is largely missing.

Of course, the ultimate ‘herbalism’ is the food that you eat on a daily basis. Dark green leafy vegetables, herbs and spices are excellent sources of antioxidants, anti-inflammatories and anti-cancer substances that can dramatically influence your health. Christopher Hobbs, clinical herbalist, put it well: “The real medicine is hiding in the produce department.”

Modern science can uncover cells, molecules and atoms, but science cannot fully explain the healing nature of plants, or the intricacy and complexity of life. One only needs to view the amazing time-lapsed photos of sprouting seeds and flowers blooming in the video below to appreciate that plants are clearly much more complex, compelling and intelligent than they’re typically given credit for.