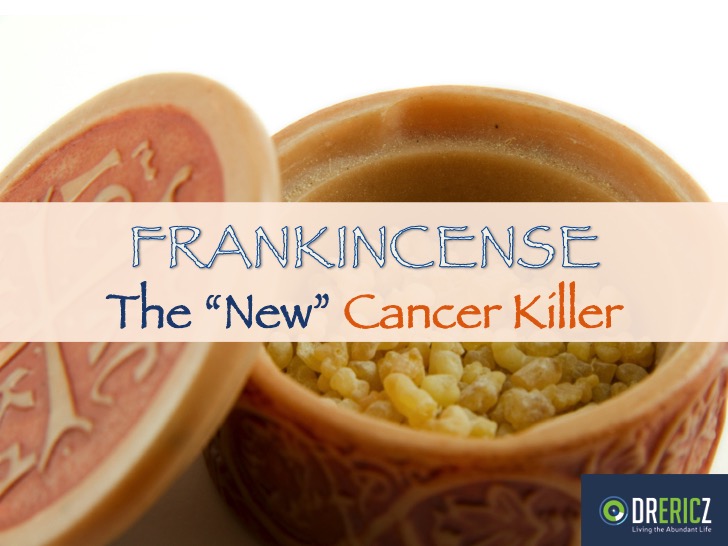 The gifts of the Magi – gold, frankincense, and myrrh – were carried a great distance specifically for the new King that their star-watching indicated. In the past, scholars and health researchers have mused and debated over them. Who were the Magi? What was the significance of the gifts? Were they for the infant Jesus or for a much bigger purpose? Did they give Him frankincense oil or just the resin?

In 2013, the University of Leicester conveniently published just before Christmas that has rekindled this theory. According to their press release, the Omani government-funded research has (for the first time) uncovered that frankincense has the ability to target cancer cells in late-stage ovarian cancer patients. And this all appeared to be due to AKBA (acetyl-11-keto-beta-boswellic acid). According to lead researcher Kamla Al-Salmani,

“After a year of studying the AKBA compound with ovarian cancer cell lines in vitro, we have been able to show it is effective at killing the cancer cells. Frankincense is taken by many people with no known side effects. This finding has enormous potential to be taken to a clinical trial in the future and developed into an additional treatment for ovarian cancer.”

It has become glaringly obvious that boswellic acid (BA) is a compound fit to kill cancer cells, and researchers have tested frankincense essential oil to determine if it should role to play in oncology.

Although there is some debate whether or not BA is too large a compound to survive conventional essential oil filtration systems, there are studies in the literature that claim they are indeed part of frankincense oil; as we will see below. Subsequently, the jury is still out as to the exact mechanism(s) explaining why frankincense essential oilis so beneficial to cancer patients. However, advances in recent research suggest thatBeta-elemene – a cancer fighting terpene found in frankincense and myrrh with the ability to cross the blood brain barrier – may be partly responsible.

As stated by the Memorial Sloan Kettering Cancer Center,

“Beta-elemene is a compound found in plants such as celery, mint, and in many others used in traditional medicine. Although the pure form is not used as dietary supplement, some cancer patients use herbs high in beta-elemene as treatment. Beta-elemene was shown to prevent growth of cancer cells in laboratory cells by different mechanisms. A few poorly designed studies done in humans showed that it may improve quality of life in cancer patients. It is unclear if raw herbs containing beta-elemene have the same effects in humans. More research is needed.”

Some even suggest that the amount of β-elemene that frankincense and myrrhcontain could very well explain why so many people claim that both oils have been instrumental to them beating cancer God’s way. At the end of the day, once we know the basic properties of an herb, root and resin we are able to determine the best ways to utilize it. Let’s take a closer look at what the components offrankincense mean for our daily lives…

Used because of its anti-inflammatory properties, the various Boswellia species have been a “go-to” or natural healers for centuries because of its ability to help with a myriad of health concerns like learning disorders, gastrointestinal dysfunction and skin conditions. New cancer research, has uncovered that the medicinal uses offrankincense can reach well beyond this.

While we do know that the various forms of frankincense (essential oils, extracts, pure resin, etc.) have the potential to fight cancer, much is left to be understood, making this a controversial topic in the natural health and research world.

Current research demonstrates anti-mutagenic and apoptotic (programmed cell death) abilities. Though the results have occurred in lab tests and we have yet to see how to best replicate these results in active cancer in humans, the demonstrated results remain. Researchers found that boswellic acids are “cytotoxic to ovarian cancer cells at pharmacologically achievable concentrations” and “may form the basis of a novel anticancer treatment for ovarian cancer, perhaps alongside conventional chemotherapy.”

For those who have added frankincense essential oil to their cancer care plan, the benefits may go beyond anti-tumor effects. Conventional treatment is often still required, but can be more painful and difficult than the symptoms of cancer itself. Brain cancer patients, for example, sometimes experience swelling in the head calledcerebral edema after their tumors have been removed. Steroid treatment is common but also associated with difficult side effects and complications.

Frankincense, on the other hand, has shown remarkable effects against this particular problem. In 2011, a clinical trial evaluating 44 individuals monitoredfrankincense as a remedy for cerebral edema. In 60% of the patients, the swelling was reduced by 75% or more. The concluding remarks called for frankincense to be prescribed for cerebral edema in these circumstances, avoiding the struggles of steroid therapy.

Overshadowed the past several hundred years by its role in the “Christmas Story,”frankincense is finally getting the attention it deserves as one of the most viable healing agents on the planet. The journal Oncology Letters published an article late last year that highlights the ability of this Biblical tree to kill cancer cells; specifically the MCF-7 and HS-1 cell lines, which cause breast and other tumors. The essential oil has also been used with much success to treat issues related to digestion, the immune system, oral health, respiratory concerns and stress/anxiety.

Another promising property of frankincense is its potential to fight cancer. In several studies, frankincense has demonstrated anti-cancer properties and the ability to mitigate many different kinds of cancer cells. As more studies are conducted, the implications of this ability will be exciting to watch unfold!

Arguably the most potent medicinal EO out there, recent research studies suggest that frankincense not only kills cancer cells, but it also promotes health and vitality in neighboring non-cancerous cells! To help prevent getting sick and boost your immune system, simply follow the advice below and take some frankincense with acarrier oil!