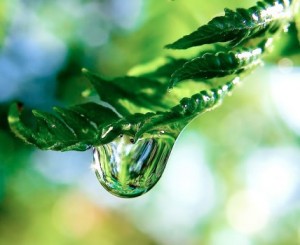 Like higher organisms, plants appear able to make complex decisions. A new study shows that plants may be able to initiate a survival mechanism by aborting their own seeds to prevent parasite infestation.

Plants have previously been shown to draw alternative sources of energy from other plants. Plants influence each other in many ways and they communicate through “nanomechanical oscillations” vibrations on the tiniest atomic or molecular scale or as close as you can get to telepathic communication.

Plants exhibit intelligence with an intrinsic ability to process information from several type of stimuli that allows optimal decisions about future activities in a given environment.

Stefano Mancuso from the International Laboratory of Plant Neurobiology at the University of Florence, Italy, and his colleagues are starting to apply rigorous standards to study plant hearing (Trends in Plant Sciences, vol17, p323). Their preliminary results indicate that corn roots grow towards specific frequencies of vibrations. What is even more surprising is their finding that roots themselves may also be emitting sound waves. For now, though, we have no idea how a plant might produce sound signals let alone how they might detect them.

Scientists from the Helmholtz Center for Environmental Research (UFZ) and the University of Gottingen have now shown from their investigations on Barberry (Berberis vulgaris), that it is is able to abort its own seeds to prevent parasite infestation.

The results, as reported in a news release, are the first ecological evidence of complex behaviour in plants. They indicate that this species has a structural memory, is able to differentiate between inner and outer conditions as well as anticipate future risks, scientists write in the renowned journal American Naturalist — the premier peer-reviewed American journal for theoretical ecology.

The European barberry or simply Barberry (Berberis vulgaris) is a species of shrub distributed throughout Europe. It is related to the Oregon grape (Mahonia aquifolium) that is native to North America and that has been spreading through Europe for years. Scientists compared both species to find a marked difference in parasite infestation: “a highly specialized species of tephritid fruit fly, whose larvae actually feed on the seeds of the native Barberry, was found to have a tenfold higher population density on its new host plant, the Oregon grape”, reports Dr. Harald Auge, a biologist at the UFZ.

This led scientists to examine the seeds of the Barberry more closely. Approximately 2000 berries were collected from different regions of Germany, examined for signs of piercing and then cut open to examine any infestation by the larvae of the tephritid fruit fly (Rhagoletis meigenii). This parasite punctures the berries in order to lay its eggs inside them. If the larva is able to develop, it will often feed on all of the seeds in the berry. A special characteristic of the Barberry is that each berry usually has two seeds and that the plant is able to stop the development of its seeds in order to save its resources. This mechanism is also employed to defend it from the tephritid fruit fly. If a seed is infested with the parasite, later on the developing larva will feed on both seeds. If however the plant aborts the infested seed, then the parasite in that seed will also die and the second seed in the berry is saved.

When analysing the seeds, the scientists came across a surprising discovery: “the seeds of the infested fruits are not always aborted, but rather it depends on how many seeds there are in the berries”, explains Dr. Katrin M. Meyer, who analysed the data at the UFZ and currently works at the University of Goettingen. If the infested fruit contains two seeds, then in 75 per cent of cases, the plants will abort the infested seeds, in order to save the second intact seed. If however the infested fruit only contains one seed, then the plant will only abort the infested seed in 5 per cent of cases. The data from fieldwork were put into a computer model which resulted in a conclusive picture. Using computer model calculations, scientists were able to demonstrate how those plants subjected to stress from parasite infestation reacted very differently from those without stress. “If the Barberry aborts a fruit with only one infested seed, then the entire fruit would be lost. Instead it appears to ‘speculate’ that the larva could die naturally, which is a possibility. Slight chances are better than none at all”, explains Dr. Hans-Hermann Thulke from the UFZ. “This anticipative behaviour, whereby anticipated losses and outer conditions are weighed up, very much surprised us. The message of our study is therefore that plant intelligence is entering the realms of ecological possibility.”

But how does the Barberry know what is in store for it after the tephritid fruit fly has punctured a berry? It is still unclear as to how the plant processes information and how this complex behaviour was able to develop over the course of its evolution. The Oregon grape that is closely related to the Barberry has been living in Europe for some 200 years with the risk of being infested by the tephritid fruit fly and yet it has not developed any such comparable defence strategy. These new insights shed some light on the underestimated abilities of plants, while at the same time bringing up many new questions.