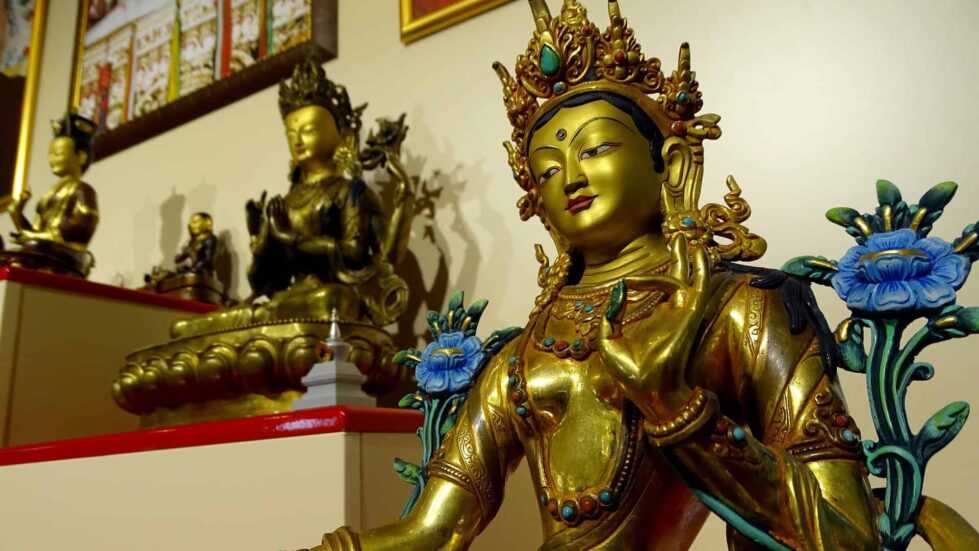 To people without some knowledge of the religions of India, it’s easy enough to think that dharma is something a little like karma. But actually, although the two concepts do link together, they are very different indeed…

Plus, what dharma means also changes in all sorts of ways depending on the specific religion you are talking about:

Hindus, Buddhist, Jains, Sikhs and many others have different understandings of what dharma is. If you want to have a little understanding yourself, this article is for you…

Dharma is an important concept with several different meanings in different Indian religions.

Hinduism, Buddhism, Jainism, Sikhism and several others have their own concept and understanding of dharma’s meaning. In fact, all of these philosophical traditions are often referred to as being “dharmic traditions”.

In general, dharma is a word and concept which defies a simple, single-word translation of its true meaning in most “Western” languages. However, it can be understood as:

But these are necessarily loose definitions and translations of definitions. The concept of dharma has been in use for thousands of years…

Where does “dharma” come from?”

While there is no direct translation for the word “religion” in Sanskrit, dharma is also often used to represent the concept of one. It may be used to indicate a system of ethics, duties and laws and to tie back into the idea of “the way things are” to suggest a cosmic order or correct spiritual path.

Historically, the concept was used in the ancient Vedic religion. This was the religion of the Aryan peoples who entered north-western India from 2000 BC onwards and was the precursor of Hinduism.

In this school of thought, dharma was considered to be an immutable universal law. Something akin to gravity. It was thought that the concept would stay the same no matter which religious tradition it was found in.

The ancient Tamil moral codes are also based on the concept of dharma.

What is dharma in Hinduism?

The dharma of Hinduism can partly be understood as a list of virtues and behaviors which constitute “the right way of living”. It is the religious and moral law by which an individual can measure themselves.

In general, it can be understood as having two main parts:

1. Universal law: this gives order to the universe.

2. Personal duty or law: the religious and moral code by which one governs one’s life.

There are also specific dharmas – which can be understood in this context as “right ways of living” – which show the rights, duties and laws as well as the behaviors and virtues expected of a person in relation to their family, politics and career as well as their status or station. However, the most important dharma is the spiritual.

This kind of concept is important to us here at the Spirit Vine Center. That’s because the idea of assessing one’s path in life and one’s relationship to the wider universe is often the goal of those who visit us to take part in an ayahuasca ceremony.

The sacred ayahuasca brew has been used by the people of South America for this kind of purpose for hundreds of years. After an ayahuasca experience, many people find themselves deeply affected by it – compelled to switch careers or make other large changes in their lives. This could be seen as trying to live more in line with their dharma.

There are straightforward differences between dharma and karma:

Dharma: suggests the “right way to live” with purpose in line with a moral code and the spiritual order of the universe.

Karma: relates to the consequences of a person’s success or failure to live their life by that code.

What is dharma in Buddhism?

The dharma of Buddhism is considered one of the religion’s three jewels or Triratna. These are:

1. Sangha: the community of practitioners.

3. Dharma: the law and order of the universe; the universal truth common to all individuals outlined in the teachings of the Buddha

Perhaps the most famous of these teachings – the Four Noble Truths – describes how ignorance is the cause of much of the suffering of the world. It also states that suffering is only temporary and that the end of suffering will come through living life with ethics borne in mind, by practicing meditation and cultivating wisdom in one’s life.

What is dharma in Jainism?

Jainism is sometimes referred to as Jain Dharma, which should give you some idea of the importance attached to the concept by Jains.
The word “Jain” comes from a Sanskrit word meaning “victor”. The victory here is said to be to cross life’s stream of rebirths and end karma by living an ethically-focused, spiritual life.

Again, this links in to the possibilities that ayahuasca offers for reexamination of one’s life and the way you choose to live it. At Spirit Vine, we see numerous people change from being very career-minded to having a more spiritual focus in their life after their retreat. This is something which always seems to leave them feeling lighter and happier.
In Jainism, dharma is the “righteous path”, the doctrine of purification and moral improvement of people contained within the teachings of the tīrthaṅkara , the saviors and spiritual teachers of the faith.

As well as the familiar concept of dharma as a moral virtue or spiritual path – common among Vedic religions – Jains also understand dharma to be a medium which allows beings to move – one of five substances which make up the stuff of existence (the others being adharma (rest), pugdala (matter), jiva (soul) and akasha (the space in which everything exists)).

One of the key concepts of Jainism is the idea of non-harming. This means that Jain dharma leans heavily on behaviors which cause no harm to living things. One of the most famous set of teachings indicates that the best way of doing this is through following the three jewels of:

Like a great deal of the dharmas practiced and discussed by Hindus, Sikhs, Buddhists and others, these concepts can have a beautiful spiritual sound even to the most unenlightened.
It’s important to understand that a person does not need to be defined or limited by their karma. Discovering more about your karma and learning how to transform is a process.

This is one of the key activities we tackle in workshops at the Spirit Vine Center as part of a retreat. By coming to understand your own desires and patterns of behavior which might not be desirable, you can begin to identify those changes you can make in your life to start living more in tune with your dharma.