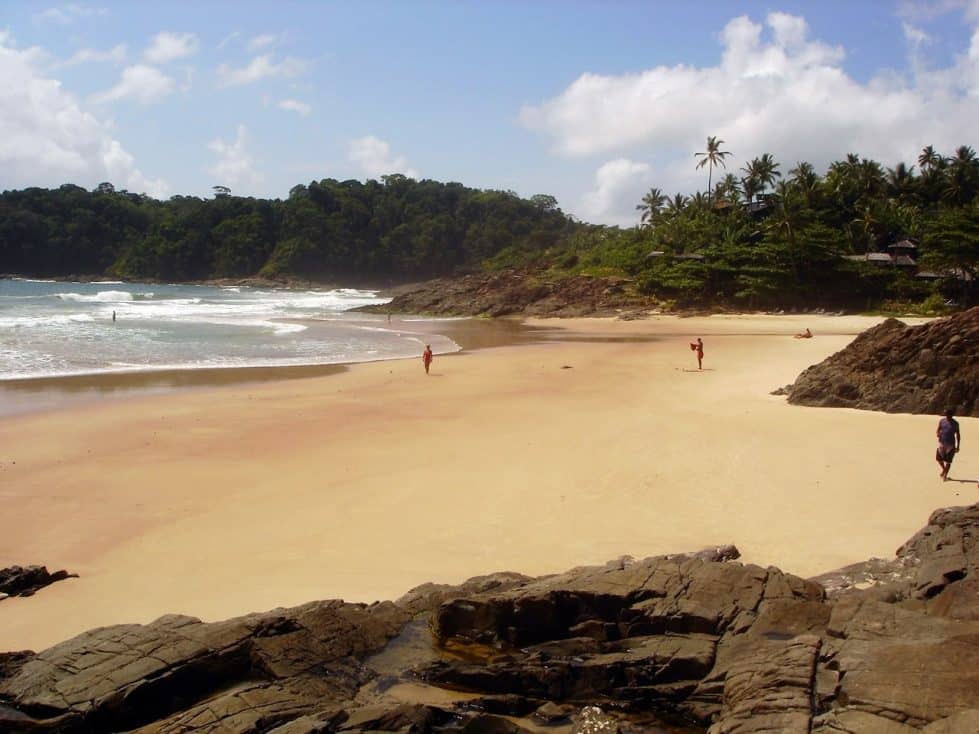 Consistent, powerful waves all year round – with a good chance that they’ll be both fast and tubular. It’s no wonder that Tiririca Beach is the home of the local surf scene in Itacaré.

In fact, you’ll be hard pushed to find a time when there aren’t a bunch of locals waiting to take their turn on the beach breaks at Praia Tiririca.

The only times when some of the locals clear out to watch are when the regional or state Brazilian surf championships take place at Tiririca – or when there’s an international tournament in town. It really is the darling of the local surf scene.

When set alongside the other paradise-like beaches in Itacaré, Tiririca might seem like more of the same (not that it’s really possible to get bored of beautiful white sands, palm trees and warm blue waters).

You can surf at Tiririca around 330 days per year. The waves are consistently good throughout that time too and it’s good at all tides.

The left and right beach breaks you’ll find here are powerful and often tubing. They attract a lot of surfers, so you might find it hard to find space.

That’s not to say that it’s not without its dangers – and, while you can find quiet times, it can also be extremely popular.

To surf at Tiririca you’ll need to be at least an intermediate level board rider.

When the surf really gets up, only very experienced surfers should get in the water. That’s because the cross-currents here can drag you towards the rocks on either side of the sands quite easily.

The entry and exit can also be a little difficult as there are no channels.

Okay, so surfing at Praia Tiririca is great. What about the rest of what the beach has to offer?

Tiririca is an immensely popular location for several different board sports.

At the start of the decade, a skate bowl was built at the edge of the sands to cater for the growing skate community in the local area, as well as those attracted by the regional, state and international surf tournaments.

In some ways, it’s almost funny how ideal Praia Tiririca is as a surfing location. To the rear of the beach, you’ll even find a freshwater stream which ends at the beach in short but powerful natural waterfalls.

That’s right – these make for the perfect freshwater showers to get the salt off you!

If you’re extending your visit to Itacaré, or you’re only visiting to get your surf on, there are pousadas – if you’re not familiar, these are something in the nature of Brazilian Bed and Breakfasts or small, usually family-operated, hotels – very close to the beach.

You can get a bite to eat, fresh fruit and drinks at the beach huts along the rear of the sands.

How to get to Tiririca

One of the other reasons for this beach’s popularity is its location. It’s only a 10 minute walk from the town center. You really can’t go far wrong trying to find it.

Resende, Costa and Ribiera beaches are all nearby too. They all have decent surf opportunities if you’re looking for some, but its Tiririca’s consistency – probably because of the deep coastal trench topography out to sea – which makes it the local favorite.

If you’re in-country for another reason – if you’ve been at the Spirit Vine Center on one of the ayahuasca retreats Brazil is becoming famous for, or you’re exploring this lush tropical part of the world – even if you’re not a surfer, it’s probably worth checking Tiririca out. It’s really close to town and the local community often gives it the feel of one of those uber-cool sports shows you see on TV.

But for the surfer or sports enthusiast, local or visiting, Tiririca Beach is one that you can’t afford to miss.